Virtual Reality and the Brave New World of Storytelling 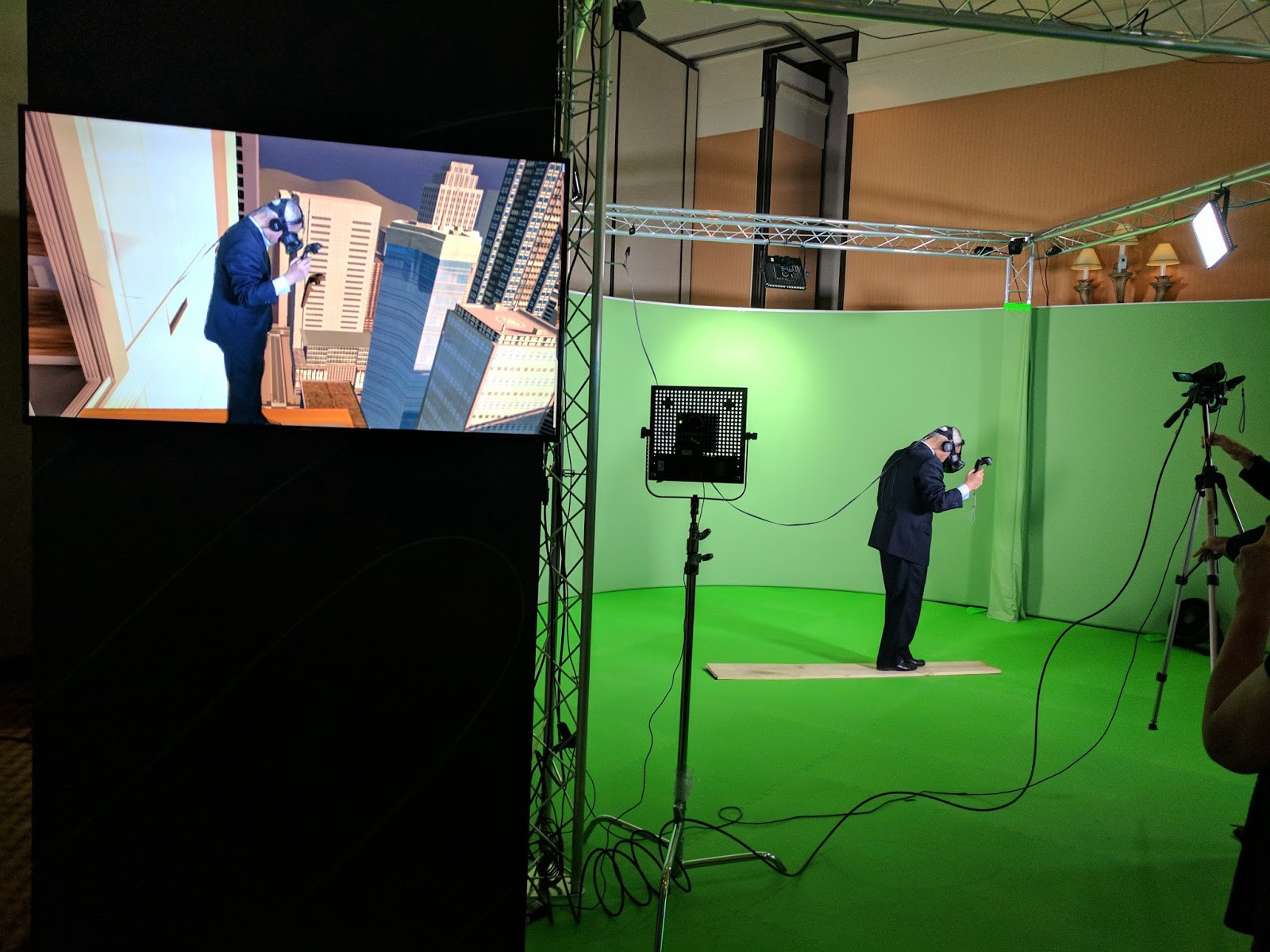 The elevator door opens. A strong gust hits, the setting sun blinds you, and the strangely comforting soft jazz cuts out. When your eyes finally adjust, you can see the cityscape stretching out before you. The tops of other buildings. Birds flying below you.

And outside the door, there’s nothing but a wooden plank floating above a 50 story abyss.

There’s no way back. The elevator only goes up. So you creep forward, inch by inch, searching with your toes, the wind in your face, until you feel the plank beneath your feet. You step out, and it wobbles. It wobbles.

You watch as a helicopter lands on a building below. You try to keep your balance, working your way to the end of the plank. All that’s left is to jump. And you do.

When it’s all over and you’ve seen the bright light, you take off your VR goggles and find that none of it is real. It’s all a simulation. You’ve been standing on a 1×6” board resting on the ground. You knew that the whole time.

And yet, your palms are sweaty. It felt so real.

Why did your senses lie to you?

Simulated realities are nothing new, and they have long since elevated our ability to craft, tell, and savor unique experiences. You’ve used many of them yourself. Graphical user interfaces offer a virtual desktop and workspace for computer users (à la Windows and Mac OS X). Video games are visual renderings of virtual worlds that provide interactive storytelling experiences.

You could argue that novels are a simulated world created moment-to-moment in your brain by your very act of reading.

And if you’re Elon Musk, you believe that we live in a computer simulation.

Virtual Reality is designed to create an experience where you feel like you are suddenly in another place. Another real place. To trick your senses into believing that the planetary vistas, karate dojos, or precarious planks hanging off the sides of buildings are now your reality, when physically you’re in a lab or conference room.

This is the concept of Presence.

Your human senses and instinct take over, pushing aside your logical reasoning, allowing for a raw, emotional response to your new, simulated experience.

You jump, even though you know you’re on the ground.

One Minute to Wow

When we opened our VR lab in 2016, we immediately sought a compelling project. After much deliberation on a project path, we approached Seagate’s VP of Marketing with a proposal. Could a 60 second virtual experience generate a lasting buzz? Or would it result in a resounding “meh”?

We called this experience the “One Minute to Wow.”

How could we, within 60 seconds, create emotional presence by tricking human senses? In essence, how could we scare the pants off of someone when they’re just in a conference room?

Zooka’s VR engineers spent six months submerged in both the Unity 3D game engine and SteamVR, learning the ropes and developing a concept. We chose the HTC Vive system, which provided us with what’s known as Roomscale. Roomscale offers the freedom for a user to move around and interact with a room-sized virtual environment.

Our Plank Experience premiered in Seagate’s booth at CES 2017. Our goal was to present a compelling experience that would convince tech executives not only about the B2B potential of VR, but also that VR is more than just Google Cardboard. More than just a fad, here today and gone tomorrow.

We sought to portray that simulated realities are a ubiquitous part of our culture, and that immersive, emotionally present VR experiences are the brave new world in rich storytelling.

We measured increases in user heart and respiratory rates. Numerous sweaty palms. One man teared up in the goggles (this took some time to clean). Some people crawled out on all-fours. Others simply refused to exit the elevator.

We discovered that men had a stronger reaction to the experience, where only about 50% stepped out onto the plank, versus 65–70% of women who were able to exit the elevator and complete the experience.

And the moment the door slid open, nearly everyone cussed aloud.

So why was our experience such a success? After all, it was simply some lines of code, a pair of goggles, a fan, and a slab of wood. And yet, people were crawling on the ground.

The devil is in the details. By focusing on creating an emotionally present situation, we were able to force strong gut reactions in the lizard parts of the brain. A series of small, precise details — such as a wobbly, bowed plank, or birds flying beneath you — combined to overwhelm any semblance of logical reasoning, creating a lasting, physical effect.

This is just the beginning for VR here at Zooka Creative, and if we have anything to say about it, across the tech world. To ignore virtual reality is to miss the next, vital method of telling stories, an evolution with vast potential to change those who experience it.